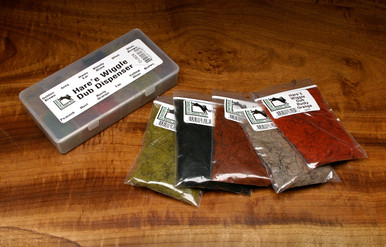 Hareline Hare'e Wiggle Dub Dubbing. Want some extra movement in your nymphs and streamers? Hare'e Wiggle Dub will do the trick. Best when used in a dubbing loop. It is a mixture between Hare's Ear Dubbing and tiny rubber legs. Pick out tied down wiggle material with the Wasatch Dubbing Tools or Petitjean Dub Needle (Marc Petitjean Thread Split & Dub Needle). This will only cut the fibers that have tension on it, not the loose materials that scissors would cut through.