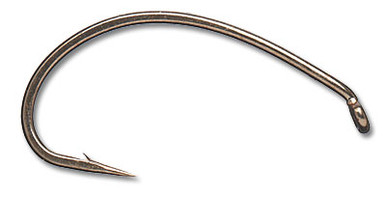 Daiichi 1130 Caddis Pupae/Emerger Hook. Tiemco introduced continuous bend hooks into the American fly tying market in the 1980's. This particular style is similar to the TMC 2487, which quickly became popularly known as a "Scud Hook" because of its shape, which is similar to the curve of freshwater shrimp (scud). Flies tied on hooks with bent shanks or continuous bends have a more natural shape or look more lifelike according to many fishers. The Orvis 1639 or Daiichi 1130 has a short shank and a special curved bend which makes this light wire hook perfect for fly tying shrimp imitations, caddis fly pupae, and caddis emergers. 1 XFine wire.