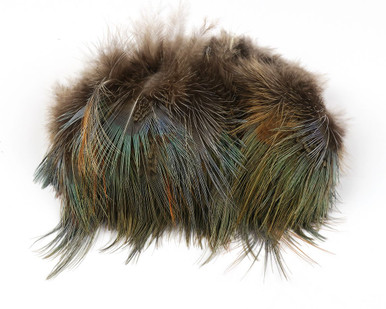 Strung Ringneck Pheasant Rump Feathers- My favorite part of the ringneck pheasant is the rump. The iridescent blue/gray/green primary feathers and the secondary aftershaft feathers are both extremely versatile and have many uses. The rump hackle can be used for cheeks, wings, hackle, claws, tails, fins, gill plates, etc. and the aftershaft can be used for gills, collars, tails, etc.. The rump hackle is especially popular for spey, and steelhead and salmon fly patterns.

Jack Gartside on ringneck pheasant; "There's probably not a bird that flies that has more uses for the fly tyer than the ringneck pheasant. From the top of its head to the tip of its tail, there's hardly a feather on a pheasant that can't be used to some good purpose. Whether it's hackle you need or tailing fibers, winging material or body material, shoulders or cheeks--whatever--it's all there".