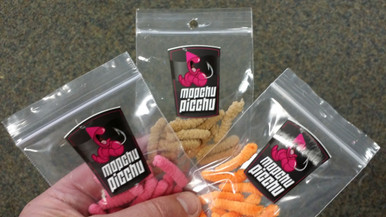 Mop Fly- Mopchu Picchu Worm Material- Machu Picchu is a 15th-century Inca site located in the Cusco Region of Peru. Scholars can only hypothesize about its uses but we do know it was built during the height of the Inca Empire and abandoned roughly 100 years later as a belated result of the Spanish Conquest. Just as in fly fishing, the ways and traditions of the Inca's have changed and been abandoned but will never be forgotten. The Mopchu Picchu Worm is big and grandiose like Incan architecture. Trout love this oversized chenille worm more than most things you can throw at them. The material offers great movement and bold colors. Fish them in clear water or high, turbid water. You wont believe it. When combined with a brass cone (Brass Cone Heads) and heavy hook (Daiichi X510 X Point Hook), this pattern sinks like a stone. 12 strands per pack will make 6 mondo double worms or 12 single strand worms.