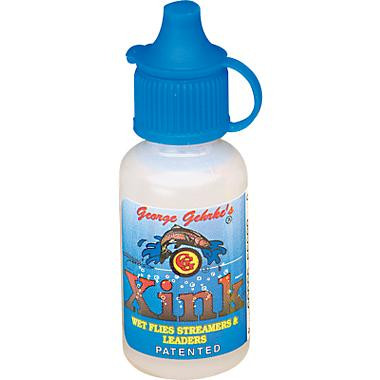 It may well be the most revolutionary invention in Fly-Fishing since the discovery of the hook. This product will eliminate the majority of the lead used in nymphs and wet fly patterns throughout the world if only everyone started using it. Gehrkes XINK® is the only patented Fly Sink in the world. All other products are plagiarized from other industrial sources including the use of common soap. Gehrkes XINK® is amazing because it is wetter than water without washing off, which was, until invented by George Gehrke, a chemical impossibility.

Gehrkes XINK® is simple to use. Before one gets their streamer or wet fly wet, simply dress it with a very little amount Gehrkes XINK®. That wet fly is then condemned to sink forever.

* 1. Go slower than the river current passing by. It is dragging because the nymph's specific gravity is grossly separated from the density of water.
* 2. A nymph dressed with just Gehrkes XINK® will sink just as fast, if not often faster than a nymph with lead wraps in it.
* 3. The nymph that is lightly dressed with just XINK® will tumble along in a current more naturally than a lead-weighted one. Often, our customers catch 3 fish for every one compared to the old method. Lead weighted flies also tend to ride up side down and unnaturally.

Gehrkes XINK® will also sink tippets and leaders except the super hard/slick brands. XINK® works great with Maxima hand-tied leaders and tippets including other brands. XINK® also is marvelous in increasing the sinking rates of sinking tip and full length SINKING fly lines. In fact, it's almost a miracle on its ability for a fly fisherman to go deep, and fast! Shortened leaders, which contain 18 inches each of butt, taper, and tippet lengths, allow close, controlled tracking with increased fish strikes throughout the day. The product the pros use.