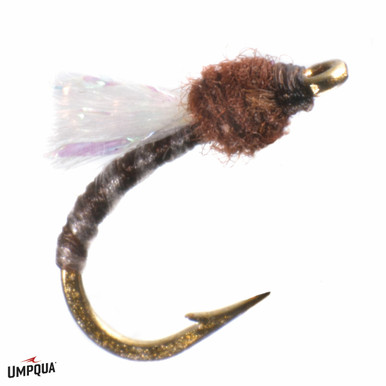 Dorsey's Top Secret Midge- The Top Secret Midge was invented during the winter of 2001. It was designed to imitate the millions of midges that hatch on a daily basis along South Platte watershed. The Top Secret Midge has an interesting history—it was given its name while a group of guides were enjoying a nice day of fly-fishing (a day off) below the small community of Deckers. I had hooked a fair number of nice brown trout in a run several hundred yards above the Trumbull bridge when Mick Stefan—one of my fishing companions—asked me what pattern I was catching my fish on??

You have to know Stefan to appreciate this—he’s always joking around about something. I looked at Stefan and told him it was a “Top Secret Midge”.   At the time, the fly-pattern had no name; it was simply a little brown midge pupa that had routinely caught fish in the Eleven Mile Canyon, Cheesman Canyon, and the Deckers area. Stefan gave me one of the most interesting looks that I have ever seen, a puzzled expression, and deep inside you could see the wheels were spinning trying to figure it out. “Come on—what are you using?” Stefan replied. I told him a “Top Secret Midge”, chuckled a bit, then proceeded to show him the pattern (after swearing him to secrecy of course, after all; it was the Top Secret Midge). He flipped down his Hat Eyes and stared with amazement. After that outing, I named the former little brown midge pupa—the Top Secret Midge.

Much of the Top Secret Midge success is a result of combining a two-tone thread body (brown and white) with an emerging wing made from Glamour Madeira. The segmented abdomen is “dead-on” when you scrutinize the naturals. The tuft of Glamour Madeira adds a subtle hint of flash without overdoing it. The thorax is tied with rust-brown Superfine dubbing, which helps, highlight the area that contains the wings and legs of the emerging adults. I’ve found having the right silhouette during selective feeding phases can make or break your success. It’s hard to argue with the “size, shape, and color” formula—it has been fool-proof for generations.